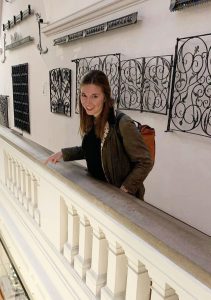 This is a new annual award given to a graduate student in the Department of Classics who has demonstrated excellence in teaching.  This award is named in honor of Cecil W. Wooten who received his PhD from this department in 1972 and returned to join the faculty in 1981.  For over thirty years, from the time he joined the faculty until his retirement in 2012, Professor Wooten directed the elementary Latin program, training and mentoring scores of graduate students in Latin pedagogy.  He also regularly taught popular large lecture courses, including CLAS 122, The Romans, and CLAS 242, Sex and Gender in the Ancient World, in which he mentored dozens more graduate student TAs.  The new Wooten award is named in his honor, in recognition of his contributions to the training of graduate student teachers in the department.

Ball is pursuing her degree concentrating on Greek Archaeology. Her MA Thesis was titled “A New Typology of Magic Dolls,” advised by Prof. Jennifer Gates-Foster. Her dissertation is on the topic of “Material Expressions of Culture Contact in Coastal Aegean Thrace” under the direction of Prof. Donald Haggis.

Ball shares her hopes in spreading her love for Classics below:

“I feel incredibly lucky to pursue my passion of studying the ancient Mediterranean world, and spending most summers digging in Greece. In addition, I love teaching and contributing to courses on all topics related to ancient civilizations, from poetry to magic to archaeology. I truly believe our Classics courses can appeal to anyone, not just those who intend to pursue a degree in Classics. The ancient world was vast and interconnected and every day we learn more about the diversity of characters and ideas that populated what is traditionally considered the Classical world. I would encourage any student considering a class in the Department of Classics to come and discuss how we can relate their interests to the study of the ancient world.”