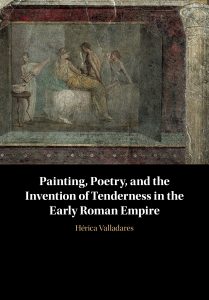 Tenderness is not a notion commonly associated with the Romans, whose mythical origin was attributed to brutal rape. Yet, as Hérica Valladares argues in this ground-breaking study, in the second half of the first century B.C.E. Roman poets, artists, and their audience became increasingly interested in describing, depicting, and visualizing the more sentimental aspects of amatory experience. During this period, we see two important and simultaneous developments: Latin love elegy crystallizes as a poetic genre, while a new style in Roman wall painting emerges. Valladares’ book is the first to correlate these two phenomena properly, showing that they are deeply intertwined. Rather than postulating a direct correspondence between images and texts, she offers a series of mutually reinforcing readings of painting and poetry that ultimately locate the invention of a new romantic ideal within early imperial debates about domesticity and the role of citizens in Roman society.

Professor Valladares received her Ph.D. in Classical Studies from Columbia University. The author of several articles on Roman wall painting and poetry, she has held fellowships at the American Academy in Rome and the Center for Advanced Study in the Visual Arts in Washington, D.C. She joined the faculty at UNC Chapel Hill in 2015.