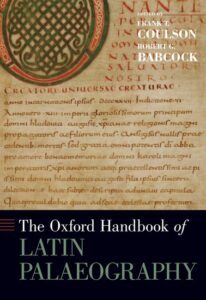 Latin books are among the most numerous surviving artifacts of the Late Antique, Mediaeval, and Renaissance periods in European history; written in a variety of formats and scripts, they preserve the literary, philosophical, scientific, and religious heritage of the West. The Oxford Handbook of Latin Palaeography surveys these books, with special emphasis on the variety of scripts in which they were written.

Palaeography, in the strictest sense, examines how the changing styles of script and the fluctuating shapes of individual letters allow the date and the place of production of books to be determined. More broadly conceived, palaeography examines the totality of early book production, ownership, dissemination, and use.

The Oxford Handbook of Latin Palaeography includes essays on major types of script (Uncial, Insular, Beneventan, Visigothic, Gothic, etc.), describing what defines these distinct script types, and outlining when and where they were used. It expands on previous handbooks of the subject by incorporating select essays on less well-studied periods and regions, in particular late mediaeval Eastern Europe. The Oxford Handbook of Latin Palaeography is also distinguished from prior handbooks by its extensive focus on codicology and on the cultural settings and contexts of mediaeval books. Essays treat of various important features, formats, styles, and genres of mediaeval books, and of representative mediaeval libraries as intellectual centers.

Additional studies explore questions of orality and the written word, the book trade, glossing and glossaries, and manuscript cataloguing. The extensive plates and figures in the volume will provide readers with clear illustrations of the major points, and the succinct bibliographies in each essay will direct them to more detailed works in the field.