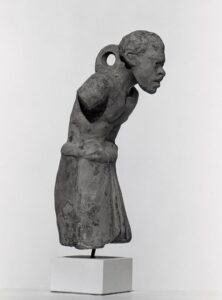 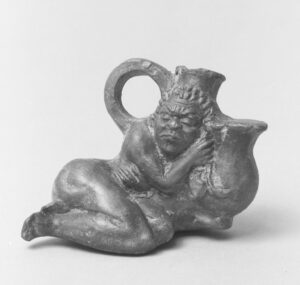 In 2016, a group of invited scholars and museum professionals converged in Houston to present their research on unprovenanced objects in the Menil Collection and issues of legality, ethics and collecting. This conference, “ Collaborative Futures for Museum Collections: Antiquities, Provenance and Cultural Heritage,” (http://cac.rice.edu/CollaborativeFutures) was the culmination of months of in-person work in Houston and collaborative discussions among this group and has now resulted in a new publication, Object Biographies, Collaborative Approaches to Ancient Mediterranean Art (https://yalebooks.yale.edu/book/9780300250879/object-biographies) from Yale University Press.

Professor Gates-Foster contributed an essay to this collection focused on terracotta figurines from Graeco-Roman Egypt in the Menil Collection that depict images of Africans. These objects were acquired by Jean and Dominique de Ménil as part of their Image of the Black Project, now archived and curated at Harvard University (https://hutchinscenter.fas.harvard.edu/image-black-archive-library). In this essay, she examines the paper trail associated with these objects, tracing some back to the collection of a doctor in late 19th century Cairo who collected them due to his fascination with racial physiognomy, a pseudo-scientific discipline widely deployed to justify racial discrimination and colonialism. The de Ménil’s motivations in purchasing these objects and their lack of concern about their original provenance and meaning is also a focus in this essay, where I consider the implications of this loss of provenance, which severs these objects from their original context in Egypt, leaving them to function as malleable symbols in contemporary society, both for good and ill. Lastly, she considers their function in antiquity and the context of this iconographic choice, when it can be known, which raises important questions about the use of images of Africans in Ptolemaic and Roman Egypt, and racial discrimination in ancient Mediterranean societies.