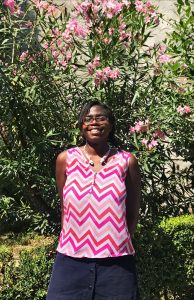 Grace Miller, graduating senior, class of 2021 (Combined Latin and Greek Classics major with a Latin Emphasis), is interested in ancient drama, more specifically Greek tragedy and Roman Comedy, and in the portrayal of subaltern life in antiquity. Grace’s interest in Classics began in middle school with her love of mythology. She came to UNC’s Classics department ready to pursue her interests in mythology and learn more about Greco-Roman culture and society. She says that UNC’s Classics department welcomed her with open arms and encouraged her interests. Grace’s senior honors thesis, “Cursus Servorum: Gendered Patterns in Owners’ Valuations,” identified the ways in which the owner classes assess the financial value of enslaved persons, and explored the ways that gender affects these assessments. This thesis earned Highest Honors. She is the 2019 recipient of the Eunice and Luther Nims Scholarship in the Department of Classics which supported her in attending the Living Latin in Rome program at the Paideia Institute; the 2019 recipient of the Manson A. Stewart Award from the Classical Association of the Middle West and South (CAMWS); and the 2021 recipient of the Epps Prize in Greek Studies awarded to “that student whom said faculty shall judge shows the greatest interest and promise in coming to understand the Greek language, literature, history and outlook.”

Grace has won a major fellowship from the University of California at Santa Barbara, the Doctoral Scholars Fellowship. In the fall, Grace will enroll in UCSB’s Classics Ph.D. program to pursue her goal of becoming a Classics professor.