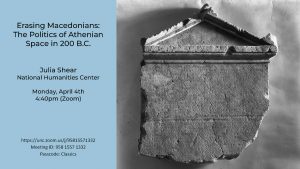 In 200 B.C., the Athenians, under increasing external pressure, abandoned the policy of strict external neutrality which they had pursued since 229, when they literally bought back their freedom from the Macedonians. Now, they declared war on King Philip V of Macedon and engaged in a period of erasing Macedonians from their inscribed documents and their cityscape. In this talk, I ask how these erasures affected the images presented by the inscriptions and what the texts and their images tell us about the politics of space in Athens at this time. As I shall argue, the war against the Macedonian king required a change in the image of the good citizen and not all earlier honorary monuments could accommodate this new imagery. The processes of erasure did not take place evenly throughout the city, but were focused on areas which were already particularly connected with citizens.