Emily is a junior majoring in Classics, concentrating in Greek and Latin. Her academic interests include Augustan poetry and gender, sexuality, and class in antiquity. She is currently the president of Eta Sigma Phi. 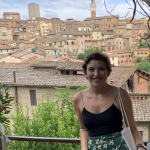 Jenna is a senior in the Classics department specializing in Classical Archaeology. Their academic interests in the classroom have included: the visibility of women in the archaeological record, Etruscan archaeology, the Greek language, and the history of the early Roman empire. Last summer they attended field school in Umbria, Italy that solidified their interest in the material culture of the early Roman Empire, passion for field work, and love for the Italian language and culture. They are looking forward to after graduation, “I plan to attend a post-bacc program for Ancient Languages and then hopefully continue on to attend a PhD program for Classical Archaeology.”

Arjun is a senior majoring in Classics, Latin concentration with a minor in Food Studies; combined Philosophy, Politics and Economics.