Susan Sellers (2023 Resident) and Hérica Valladares (2009 Fellow, 2023 Resident) will explore hidden stories that are embedded in objects through their forms, materials, and uses.

Susan Sellers is the current Henry Wolf Graphic Designer in Residence at the American Academy in Rome and a designer based in New York who works across disciplines, focusing on identity, exhibitions, and public spaces. She is a founding partner of the design firm 2×4 and the former director of design for the Metropolitan Museum of Art. Her current project investigates materials and forms of display across time and political ideologies. 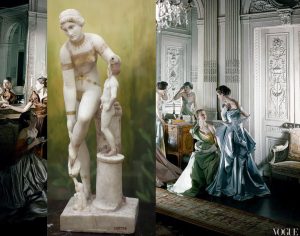 Hérica Valladares is the current Esther Van Deman Scholar in Residence at the American Academy in Rome and associate professor of classics at the University of North Carolina, Chapel Hill. She is the author of numerous articles on Roman wall painting, the history of archaeological exploration on the Bay of Naples, and the reception of classical antiquity in the early modern period. Her book Painting, Poetry, and the Invention of Tenderness in the Early Roman Empire was published by Cambridge University Press in 2021. While in Rome, Valladares is working on a new monograph, whose current title is Fashioning Empire: Roman Women and Their Objects.

The conversation, to be moderated by Marla Stone, the Academy’s Andrew W. Mellon Humanities Professor, will be held in English.

This event, to be presented in person at the Academy as well as on Zoom, is free and open to the public. Please register for Zoom in advance. After registering, you will receive a confirmation email containing information about joining the webinar.