Graduate student Erika Weiberg has spent the past academic year in Greece as a Bert Hodge Hill Fellow at The American School of Classical Studies at Athens, participating in the Regular Program of the School. Below, she shares some of the highlights of her time in Greece.

While visiting the Cyclopean walls of Asine, the Nobel Prize winning Greek poet George Seferis imagines that he is touching the same stones that the Mycenaean king of Asine once touched. As a Regular Member at the American School of Classical Studies at Athens this year, I have traveled throughout Greece looking for traces of the people who once inhabited the ruins we visit, though unlike Seferis, I am more interested in the ordinary people of ancient Greece than a king mentioned once in Homer. Along the way I found more than I was looking for: an oracular tree, ancient graffiti, mythical street names, the revival of ancient games, warrior women, and olive harvests. This photo essay captures my favorite moments from this year of time travel. Listening to the Sacred Oak at Dodona: On our trip to Northern Greece, we visited the site of Zeus’ oracle at Dodona. This tree, to which I am listening for whispers from Zeus, is the descendent of the oak trees from which people sought answers to their problems by writing questions on strips of lead. The museum at nearby Ioannina displays some of these strips with questions about whether to remarry, whether to move, whether to join the army, whether to sue someone in court. While we were at the museum, a modern-day oracle had set up shop in a back room. One of our group etched on a strip of copper, “What should I name my firstborn son?” He answered, “Zeus.” Ancient marble quarry on Thasos: Greece is so rich in marble that every apartment building in Athens has a marble staircase. We visited this ancient quarry on the island of Thasos just before sunset. You can still see cuttings, drill marks, and column drums left behind from ancient building projects. On one block of stone we found an ancient graffito of two people, one with arms outstretched, another hugging her middle, as if hiding something inside her. Next to them two stars. Though the water made the marble too slippery to walk on, we swam in the nearby bay as the sun set, tracing with our toes the absent stones of ancient temples. At the intersection of Eteocles and Polyneices Streets in modern Thebes. Modern Thebes is built on top of the ancient city famous from myth as the adopted city of Oedipus. Though much of the ancient city is buried, its presence is remembered in other ways. The two sons of Oedipus face off at the corner of these two streets as they once did at the gates of Thebes, each fighting for the throne after their father cursed them. Yet not all is tragic in Thebes: we discovered our favorite loukoumades (Greek doughnuts) at a sweets shop named, confusingly, Umami. 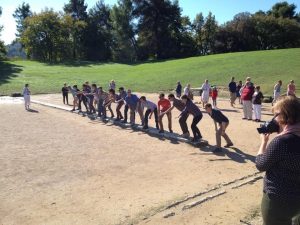 The starting line at ancient Olympia: In a spontaneous revival of the stadion, a 200 meter foot-race, we crouched at the starting line in the stadium at Olympia and waited for our cue to start. Though there were no praise poets or choruses of revelers waiting to lead the victory celebration, the names of the winners (Sebastian and Scarlett) will nonetheless live forever in our memories. We raced at many of the stadiums we visited along the way, including the Panathenaic stadium in Athens, but the stadion at Olympia is still the most prestigious race to win. | Photo by Danielle Smotherman 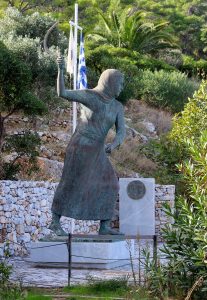 Memorial to the Maniot women: We wound our way deeper into the Peloponnese, venturing into the Mani peninsula once so cut off from the outside world that it was never controlled by the Ottomans. While there are few ancient remains to see here, the landscape mostly hostile rock, legends abound about the more recent inhabitants of the peninsula. In his account of his travels in the Mani, Patrick Leigh Fermor describes a vanishing warrior society, controlled by rival families who often killed each other in violent feuds. The Maniots called their newborn sons “guns,” while the Maniot women’s most important social functions were breeding “guns” and singing dirges, elaborate, spontaneous metrical poems. These dirges, called miroloyia, seem to have their roots in those sung by women in ancient Greece, though in modern times it is an art peculiar to the Mani. I found this memorial to the unnamed women warriors of the Mani near the Diros cave. 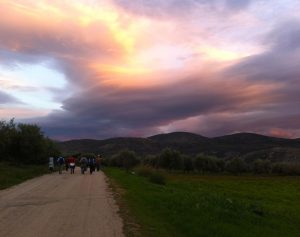 Sunset in the Berbati Valley: After we visited ancient Mycenae, we walked the traces of a Mycenaean road (not pictured here) from the acropolis down through the Berbati Valley. Along the way we found a tholos tomb and a Roman bath complex, while passing through olive groves where we met local farmers and workers harvesting olives. We ended our walk at dusk, and one kind farmer invited us to ride to our bus on his tractor. We jumped on and enjoyed the purple and orange sky from a bed of fresh-picked olives. 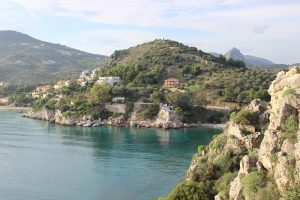 View from the acropolis at Asine: Seferis compares the green sea at Asine to the “breast of a slain peacock.” The water was so clear you could see to the sea bed from the acropolis above. Here a view from the king of Asine’s walls, where we ended one of our days “touching with our fingers his touch upon the stones.” As often in Greece I was struck by the layers of time coexisting in one place: from the Cyclopean walls to the machine gun nests built by the invading Italians not long after Seferis finished his poem, “The King of Asini,” in January 1940.