Benefiting from the Harland Archaeology Fund, Robyn has been able to participate in the Leon Levy Expedition to Ashkelon for several summers. When not on site researching her dissertation, Robyn teaches for both our department and the Friday Center. Below she shares her summer experiences. 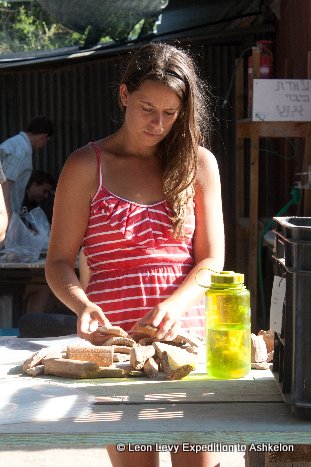 I have been a staff member of the Leon Levy Expedition to Ashkelon since 2009, my first year in graduate school at UNC. The site, on the southern coast of Israel, is a multi-period tel with occupational levels stretching from the Neolithic to the modern era. I came on board at the suggestion of Jodi Magness, who put me in touch with the excavation’s director; in their second season digging a monumental Roman public building, the dig was looking to increase the number of Roman archaeologists on staff. Since my primary interest is on Roman cities in the Near East, I jumped at the chance—the expedition had been excavating at Ashkelon since 1985, and, well, the fact that the site is located on the beach (and the dig participants are housed in a luxury hotel) didn’t hurt, either.

The past four seasons at Ashkelon have been eventful and productive. In 2012 we finished our investigation of the Roman monumental building—a massive senate house dating to the period of Herod the Great and then enlarged and redecorated in the third century CE—and are now turning to a new project on the site’s “Acropolis.” During my tenure at Ashkelon I’ve worked in various capacities—square supervisor of a 10×10 meter square, square supervisor of a 10×15 meter square (wait, make that a 10×20 — surprise! We expanded mid-season!), wall-finder (17 in one square!), Roman ceramicist, Byzantine ceramicist, aspiring Islamic assistant ceramicist, glass expert, lamp enthusiast, tour guide, teacher, and, of course, the dig’s unofficial expert on all things caffeinated.

I’ve also had the great fortune to teach four groups of volunteers about archaeology — to see them look at me like I’m crazy when I explain the first week that, no, really, that pile of dirt is different than this pile of dirt. In my second season I had a volunteer who found a lamp, coin or sculptural fragment nearly every time she put her pick in the ground; in my third season, I worked with a transplanted New Yorker who sang polka versions of Swedish sea shanties while working. Once, during the dig’s annual community day, one of my local volunteers (a girl of all of 12) uncovered an intact painted Islamic period jug — she was, rightfully, the hero of the day in her class, and the envy of all of her peers. And, last year, three of my volunteers, Pat, Ben, and Pascal pictured above, dressed up in make-shift togas (hotel sheets) for my lecture on the Roman Near East.

The 2013 season will mark the first year that I will not be in the field — the first time in nine years that I will be in the United States for the Fourth of July, and the first time in nine years that I won’t have both a flip-flop and sneaker tan (very stylish). This summer I’ll be doing a study season at Ashkelon, finishing up the publication of the Roman senate house, and working on the glass collection (specifically the Islamic glass). I’ll be doing some preliminary work on the site’s collection of erotic oil lamps and its famous Late Roman bathhouse and associated drain (where the remains of nearly 100 infants were found).

Next summer?  After holding a CAORC-ACOR fellowship in 2014 (which I’ll spend in Amman, doing research for my dissertation), the old tan lines will return — I’ll be back working at Ashkelon’s Acropolis, likely on a large Byzantine or Roman building.