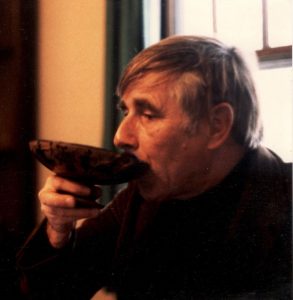 John Herington (1924-1997) was educated at Oxford and taught at Manchester and Exeter before coming to the US in 1960 to teach at Smith College.  There followed a peripatetic career that took him to Toronto, Texas, Stanford, and eventually, in 1972, to Yale, where he was soon appointed Talcott Professor of Greek and where, apart from a brief sojourn at Duke, he remained until his retirement in 1992.  He then moved to Chapel Hill to be with his wife Sara Mack, and taught occasionally in the Department of Classics at UNC.  A renowned scholar of Aeschylus, Herington’s interests ranged widely, and his publications include a groundbreaking article on Seneca (“Senecan Tragedy,” Arion 5 (1966) 422-71).  Among other honors, he was the Sather Professor at Berkeley in 1977-78; his Sather lectures were published in 1985 as Poetry into Drama: Early Tragedy and the Greek Poetic Tradition (U. California Press, 1985).  Above all, however, he was a lover of literature, especially poetry, which he strongly believed must be read aloud and in the original language in order to be fully understood and appreciated.