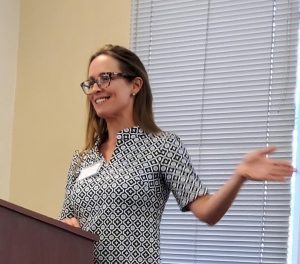 Emily Baragwanath received her B.A. (1999) in Ancient History and English and M.A. (2001) in Ancient History from the University of Auckland, New Zealand, before taking up a Rhodes Scholarship to Magdalen College, University of Oxford, U.K. She gained her doctorate in Classics from Oxford (2005) and then continued work as a postdoctoral fellow at Christ Church, Oxford, before her arrival in Chapel Hill in summer 2007. She has since pursued her research at Harvard’s Center for Hellenic Studies in Washington D.C. (2009-2010) and as an Alexander von Humboldt fellow at the University of Heidelberg in Germany (2013-14). In 2020-21 she was a Fellow at the National Humanities Center.

Her main area of scholarly interest is the literary techniques employed by Greek historians in their construction of historical narratives. Her book Motivation and Narrative in Herodotus (Oxford University Press, 2008), winner of Oxford’s Conington Prize and the CAMWS Award for Outstanding Publication 2010, explores the representation of human motivation in Herodotus’ Histories. She is co-author of the Oxford Bibliographies Online: Classics Herodotus entry (launched in 2010). In other research she considers the Greek historians’ use of mythology as a mode of narrative and explanation alongside the historical mode, and the relationship between the historians and their poetic predecessors and contemporaries. Together with Mathieu de Bakker (University of Amsterdam) she has edited a volume on Myth, Truth, and Narrative in Herodotus (Oxford University Press, 2012), and with Edith Foster Clio and Thalia. Attic Comedy and Historiography (Histos Supplement 6, 2017). With Anthony Verity she has edited Xenophon: Estate Management and Symposium for Oxford World’s Classics (2022).

Professor Baragwanath has written essays addressing historians and tragedians, ethnography and history, emotions in historiography, gender, and myth, and defending Classics. Most of these are available on her academia.edu page.

At present she is bringing to its conclusion a book-length project, Xenophon’s Women, on the fourth-century Athenian writer Xenophon. It examines his representation of women and their narrative and explanatory role across his literary oeuvre. She hopes that the deeper and more nuanced understanding that emerges will correct the way Classicists have thought about this individual philosopher and historian, and about gender in antiquity more broadly. She argues that Xenophon’s portraits of women expose a sophisticated narrator who uses an eclectic array of literary genres in expounding his distinct perspective, and represents an important, neglected forerunner in the history of literary depictions of gender.

Since arriving at Chapel Hill she has taught graduate courses on Herodotus, Thucydides, and Xenophon, and undergraduate courses on Herodotus, Thucydides and Xenophon, the Junior Seminar (an interdisciplinary exploration of Ancient Delphi as Greco-Roman topographical and cultural location), ‘Writing the Past’ (a First Year Seminar that starts out from the Greek historians in exploring the capacity for literature, cinema, and other modes of representation to convey history), Greek and Roman Historical Literature, Greek Tragedy, and The Greeks (a large lecture course on Ancient Greek civilization).

Professor Baragwanath has been awarded the William M. Calder III Fellowship 2012 (awarded annually to early career, highly qualified Humboldt Research Fellows) (2012), the Hettleman Prize 2013 (for Artistic and Scholarly Achievement by Young Faculty at UNC-Chapel Hill), and the Schwab Academic Excellence Award from the Institute for the Arts and Humanities at UNC (2019).