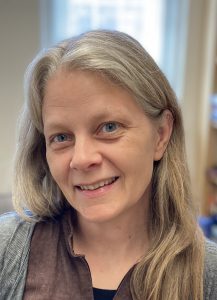 Janet Downie’s research focuses on Greek literature and literary history, especially of the Roman Imperial period. She has published on ancient rhetorical practice and theory, authorial self-construction, discourses of the body in the Greco-Roman world, the rhetoric of religious practice and experience, and spatial and material perspectives in ancient literature. Her first book, At the Limits of Art: A Literary Reading of Aelius Aristides’ Hieroi Logoi (Oxford University Press 2013) argued that this first-person narrative of illness and divine healing – without parallel in the Greco-Roman world – should be understood as a document of professional self-positioning. Her current book project, Spaces of Hellenism: The View from Roman Asia Minor investigates the spatiality of Greek literature of the Roman Imperial period, attending to the geographical perspectives of second century CE writers, most of whom wrote from the edges of the traditional Greek world.

Janet Downie’s current research engages with spatial theory, the concept of chorography, postcolonial theory, and ecocritical perspectives. Together with Classics department colleague Tim Shea, and with colleagues in Geography and Romance Studies, she convenes a Carolina Seminar on Cartography, Chorography and Literary Landscapes. Other current projects are concerned with concepts of fiction in the ancient world, the dynamics of literary reception and canon formation in Roman Imperial period, and the relationship between literature and paraliterature, broadly understood.

At UNC Janet Downie teaches ancient Greek language and literature at all levels, from introductory to advanced, including prose composition and graduate seminars on Imperial Greek literature and the Greek novel.