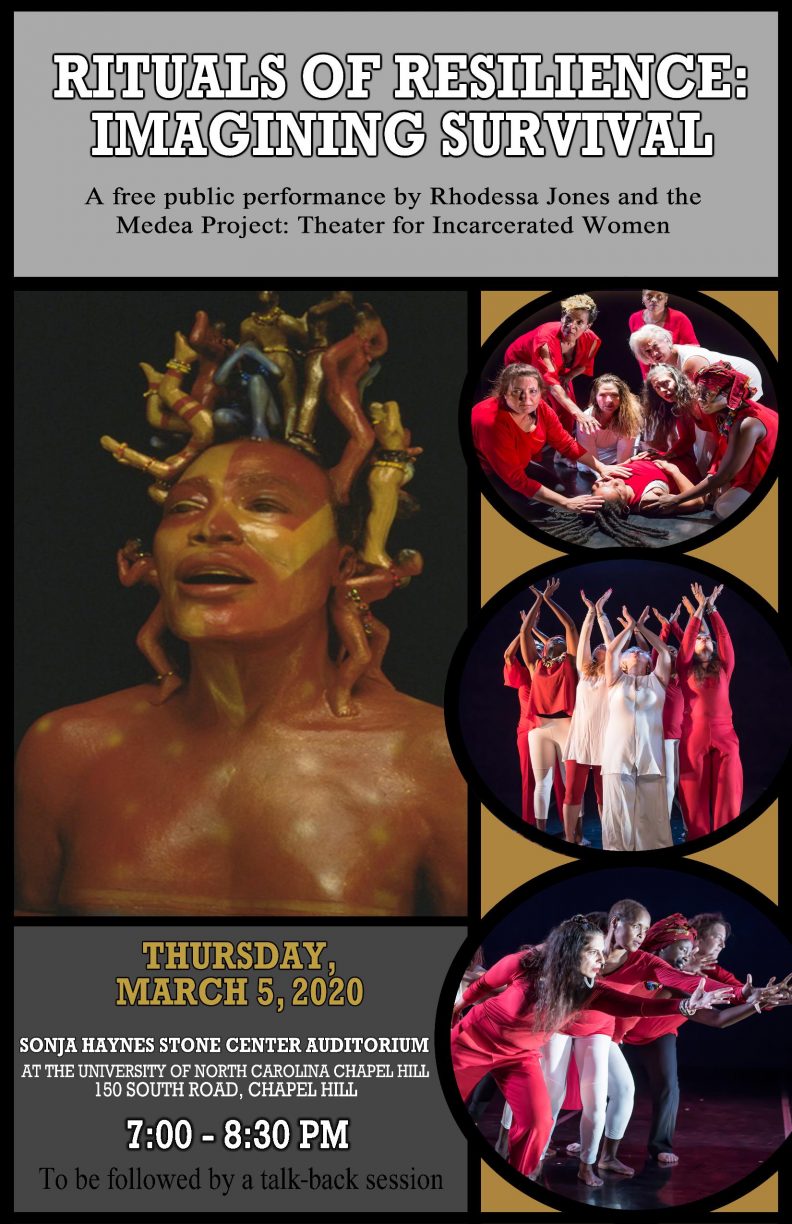 Session 1 (August 21, 2020): Patricia Rosenmeyer, Discussion of the visit of the Medea Project.
The Department of Classics (with support from the Stone Center for Black Culture and History, the Countering Hate Initiative, and the Performing Arts Special Activities Fund) invited Rhodessa Jones, the San Francisco-based artist behind The Medea Project: Theater for Incarcerated Women/HIV Circle, and a group of her performers to visit Chapel Hill in early March 2020, just before the university’s spring break. Rhodessa Jones and her group explore dramatic performance as a means of women reclaiming their lives through the creative process. They gave a well-attended public performance in the Stone Center Auditorium, followed by a talk-back session, as well as a panel discussion the next day.

Since we had no chance to share our thoughts about the event that spring because of the sudden onset of the pandemic, we decided to return to the topic in the fall, this time remotely. Faculty, undergraduates, and graduate students gathered to talk about how the performance affected us as classicists and as relatively privileged members of society. Many of us were amazed at how honest and vulnerable the performers had been about their own life challenges (e.g. incarceration, drug addiction, self-harm), and how Greek tragedy and specifically Medea’s misfortunes resonated with them. The discussion was a useful way to remind ourselves how fantastic the whole visit had been, and how lucky we were to experience Rhodessa Jones’ unique artistry. It was also a reminder of how different it is to witness a live dramatic performance, as the ancient Greeks did, rather than just read a script on the page.

Session 2 (September 18, 2020): Sharon James, “History of the Classics Department; Education of African Americans in North Carolina after the Civil War.”
This session reviewed the first 100 years of the University, when Latin and Greek were required of all students, identified the professors of Latin and Greek, all but one of whom were enslavers. It also gave a summary overview of the highly political battles, both during Reconstruction and in the Jim Crow era, over education of African Americans, with a particular focus on their education in Classics.

Session 3 (October 2, 2020): Special session: Suzanne Lye, Departmental session on EOS Reads.
The Classics Dept participated in the Eos READS for Black Lives program led locally by faculty member Suzanne Lye. In this session, students and faculty analyzed works by Frantz Fanon and Margo Hendricks and then had a larger discussion about anti-racism and the field of Classics.

Department Tea Talk (October 14, 2020): Everett Lang, “Archibald Murphey and Antebellum Classics.”
This paper is a preliminary attempt to assess the legacy of Archibald DeBow Murphey, the namesake of Murphey Hall, and his connection to Classics at UNC. Murphey graduated from UNC in 1799 and held the position of Professor of Ancient Languages for one year before resigning to study law. “Classics” in Murphey’s time was not a discrete field but the intellectual and disciplinary foundation of higher education itself: all undergraduates spent 2/3 of their instructional hours studying Ancient Greek and Latin. As Caroline Winterer notes, classical scholars of this era contributed to their field by publishing textbooks and engaging in public debate on pedagogy. Instead, Murphey directed his personal energy towards his legal and political career, the latter notable for a series of failed campaigns to modernize North Carolina’s infrastructure that were heavily romanticized by early 20th century biographers. From the UNC’s standpoint, Murphey’s greatest career success was his role in securing the university’s claim to lands in Tennessee confiscated from the Chickasaw Nation. Murphey also expended a great amount of money and effort expanding his plantation, the Hermitage, where he held over 100 Black laborers enslaved. At the end of Murphey’s life, this plantation and its staff were later transferred to Thomas Ruffin Sr. for nonpayment of debts. In conclusion, Murphey’s contribution to classical scholarship was not as significant as his political career and his legal services to UNC; in addition, his role as a slaveholder and connection to Thomas Ruffin Sr. deserve further investigation.

Session 4 (October 23, 2020): Jermaine Bryant (UNC BA, 2019; second-year Ph.D. student, Princeton), “Hip-hop for Classicists.”
Jermaine Bryant proposed that hip-hop has become an important cultural touchstone around the world and that classicists should familiarize themselves with it in order to reach students and prepare for future work that engages with hip-hop culture and its music. He oriented the Working Group to the history and political context of hip-hop culture and rap music, and demonstrated the similarities in both the origins and forms of hip-hop and Roman elegy as poetries of resistance. He also introduced scholarship on connections between hip-hop and ancient literature, as well as the reception of the classics, using hip-hop as a medium.

Session 5 (November 21, 2020): Suzanne Lye, Workshop on inclusive pedagogy.
Faculty member Suzanne Lye led a workshop on practical techniques, activities, and games suited to the online zoom format for the purpose of building a sense of belonging and fostering an inclusive learning environment in both language classes and seminars.

Session 1 (February 19, 2021): James Rives and Elizabeth Needham, On the term “Classics.”
James Rives presented the paper, A Brief Genealogy of ‘Classics’ as the Name of an Academic Discipline” and a detailed handout on sources, exploring the origins and history of the word “classics” and its cognates, as conceptual and technical terms for the study of Greek and Latin language and Literature and Greek and Roman antiquity; and its development as a term for a field of academic inquiry and discipline in university structures.

Elizabeth Needham then led a discussion about the term, its significance and implications within curricula and departments. The focus was on questions such as: What does “Classics” mean; to us, to the public, and to students? What does Classics as a field and university subject offer students, particularly students of color? Who has access to the Classics at UNC and other universities and in what form? And should Classics change its name, and what would a name change accomplish?