Ph.D. Candidate Brandon Baker is the 2020 recipient of the Olivia James Traveling Fellowship award from the Archaeological Institute of America. 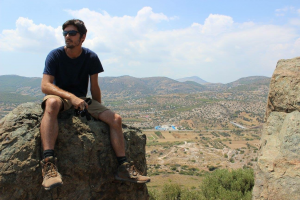 Baker intends to travel and study on the island of Evia in Greece. His project will explore “the Roman material collected from the Paximadhi, Kampos, and Bouros-Kastri archaeological surveys, and other relevant data derived from both landscape studies and excavation with the aim of writing a Roman settlement history of the region of southern ancient Euboea (modern Evia) known also as the Karystia.” His work in the evaluation “of site functions, hierarchies, and systems of the Roman Karystia grounded in the study of the material derived from fieldwork conducted in the region [will contribute] to the ongoing studies of ancient southern Euboea and Roman Greece.”