Professor of Classics Sharon L. James has edited and published a volume of essays on the Roman elegiac poet Propertius.  Golden Cynthia: Essays on Propertius, from the University of Michigan Press, includes two substantial posthumous essays by the late Barbara Flaschenriem of Grand Valley State University, whose work on Propertius remains influential.  The other scholars, Diane Rayor, Andrew Feldherr, Ellen Greene, Lowell Bowditch, Alison Keith, and Professor James herself, offer their contributions in honor of her.

After Flaschenriem died, the Press asked Sharon, who overlapped with her in graduate school at Berkeley and is a leading scholar in Roman elegy, to find a group of top Propertius scholars to write essays to accompany some of Flaschenriem’s unpublished work. 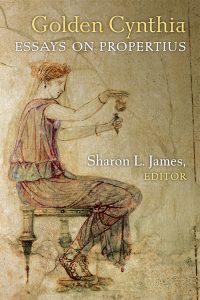 Sharon wrote the Introduction to the volume, and her own essay is entitled “Blandi praecepta Properti: What Propertius Teaches.”  One of the things Propertius teaches us, she argues, is to be a skeptical reader of the words of the speaker of his elegies, with many later poems encouraging the reader to return to earlier poems in the four-book collection with fresh eyes.

Propertius wrote during the reign of Rome’s first emperor, Augustus, and as the Press says, “responds in his verse to the complex changes that Rome underwent in his period,” when Rome was shifting from being a Republic to one-man rule.  “Propertius,” Sharon says, “is a witness to the complexities of being an elite Roman male in the period when that stops having any meaning.” On a personal level, “his family and his hometown suffered devastating losses in the civil ways that eventually brought Augustus to power.”

As the Press notes, “These essays explore topics including Propertian didacticism, dream interpretation, visual art and formalism, sex and violence, Roman imperialism and its connection to the elegiac puella, and Propertius’ engagement, in Book 4, with Vergil’s poetry.”  For more information on the volume, see the University of Michigan Press website. For information on the Barbara Flaschenriem Endowed Classics Scholarship at Grand Valley State, see the Grand Valley State University website.

Sharon James regularly teaches a graduate seminar on Propertius and has directed a number of senior theses and dissertations on elegy, some of which have been published as much-admired books.  Sharon’s own book on elegy, Learned Girls and Male Persuasion: Gender and Reading in Roman Love Elegy (University of California Press, 2003), itself remains a standard treatment of important aspects of the genre.  Further information about all of her work, including her recent work on Roman comedy, can be found on our faculty page.