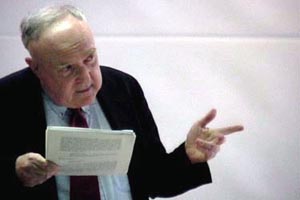 Jerzy Sever Linderski was born on August 21,1934 in Lwow, Poland. He earned his MA in 1955 in Kraków, Poland at Jagiellonian University—a research institution known until 1817 as the University of Kraków—founded in 1384 and one of the oldest universities in the world. In 1960 he earned his PhD from the same university with a study of the Roman state and its colleges in the late Republic (Państwo a kolegia: ze studiów nad historią rzymskich stowarzyszeń u schyłku republiki), and his Habilitationsschrift (second dissertation) on Roman electoral assemblies in 1966 (Rzymskie zgromadzenie wyborcze od Sulli do Cezara). In the meantime, he was busy as teacher, too, as instructor, assistant professor, and adjunct professor of Classics, all at the Jagiellonian University. Before immigrating to the U.S. in 1970, he held various positions and fellowships at the Fondation Hardt, Deutsche Forschungsgemeinschaft, and the University of Köln, Germany. The groundwork for his career in America began in 1962-63 when he held a Ford Foundation Fellowship to pursue his research at Bryn Mawr, Harvard, and Wisconsin.

In 1970 (and again in 1977, with additional visiting appointments in the summers of 1972 and 1980) he was selected for membership at the Institute for Advanced Study in Princeton, NJ, an exciting and happy time for him and his first wife Anna Kamińska-Linderski (obiit May 17, 1979). In 1971-72, he served as visiting professor in the Department of History at the University of Oregon, which, recognizing the golden egg that had fallen into its lap, reappointed him as full professor the very next year. While there he directed the MA thesis of Christoph F. Konrad, who would become his first PhD student a few years later in Chapel Hill. In 1977-1978 his rapidly growing reputation earned him a fellowship from the Simon Guggenheim Memorial Foundation, and in 1979 he was appointed Paddison Professor of Latin at the University of North Carolina at Chapel Hill, ushering in a new era of professional achievements that would cement his reputation as one of the world’s foremost scholars of Roman law, history and politics, and religion.

In 1985-1986 he received a grant from the National Endowment for the Humanities, a time of feverish work on his first, and perhaps most famous, publication, The Augural Law (ANRW II 16.3, 1986), an erudite and densely written analysis of the laws and practices of the Roman college of augurs. Other major publications include two volumes of his collected works, Roman Questions: Selected Papers 1958-1993 (Heidelberger althistorische Beiträge und epigraphische Studien 20, Stuttgart: Franz Steiner Verlag, 1995, 746 pages) and Roman Questions II: Selected Papers (Heidelberger althistorische Beiträge und epigraphische Studien 44, Stuttgart: Franz Steiner Verlag, 2007, another 726 pages). Corey Brennan’s review of Vol. 1 cites Jerzy’s “unusually deep learning, indefatigable curiosity, and (especially in problem solving) an insight that is sometimes startling” (BMCR 97.2.9). Jerzy also did great service to the profession with his many book reviews—especially his epigraphical reviews that include two volumes of the Supplementa Italica (Nuova Serie 4 and 5,” JRA 11 (1998) 459-474)—and with his updating of Lily Ross Taylor’s monumental The Voting Districts of the Roman Republic (Ann Arbor: University of Michigan Press, 2013).

Jerzy is noted, in fact, for his learned and sometimes scathing book reviews and review articles, many of which are cited as frequently as the books they reviewed. He showed little tolerance for scholars who had ignored important previous scholarship, or who had not adequately studied the meanings and contexts of pertinent Greek and Latin words; but he also gave credit where deserved. As he once remarked in a note published in Latin concerning an error made by his friend R. E. A. Palmer (De Villa Appio Pulchro Falso Attributa PP 34, fasc. 193 (1980 [1981]) 272-273): Amicus Palmerus, magis amica veritas. His pietas towards friends is evident in his tribute to Nan Michels (“Agnes Kirsopp Michels and the Religio,” The Classical Journal 92:4 (1997) 323-345), in which he cites an aversion to public accolades (“tituli sunt odiosi”) in favor of knowing the true value of quality scholarship.

His colleague George Houston relates two anecdotes that characterize Jerzy’s role in departmental and university affairs. “In the 1990s, we faculty took turns taking the minutes at departmental meetings. When it was Jerzy’s turn, he introduced a new custom: at the end of each item of business reported in the minutes, he added an elegant Latin summation of the debate and decision. I recall only one of these: a graduate student had requested a waiver from one of our requirements. The faculty debated the request for some time. On the one hand, the student was likely to make good use of the time gained by skipping the requirement, but on the other, the requirement was a good one. Eventually, the student’s request was turned down: standards must be maintained, and requirements are requirements. Jerzy’s summary: dura lex, sed lex.”

The second anecdote speaks to his deep love for the principles of academic freedom. “Jerzy took an active interest in university governance. In the spring of 2006, the John William Pope Foundation offered to fund a new curriculum in Western civilization for the University. Many faculty and students were opposed to the proposal, because the Pope Foundation was known for supporting a strictly conservative point of view; but it was, after all, a lot of money. Faculty and students met to debate the proposal in the Pleasants Family Assembly Room in Wilson Library. Toward the end of a long and inconclusive debate, Jerzy stood to speak. He suggested that everyone look out the windows, across the green area of Polk Place to South Building, and think about what the University, visible there before them, had meant over the years: freedom of thought, a wide range of beliefs, leadership for the state and country. Tying place and time together in good Ciceronian fashion, he focused the debate, and the proposal was subsequently defeated.”

Jerzy was not only intellectually gifted but also athletically, with expertise as a wrestler and a champion table tennis player in his youth. Many a younger ping-pong player learned to his chagrin that a match with Jerzy was no walk in the park, even well into his sixties and seventies. When his second wife, Deedra Keller, became ill and was confined to a wheelchair Jerzy was a devoted caregiver, noting with gleeful satisfaction that he was able to use some of his wrestling skills to maneuver her deftly wherever she needed to be. Deedra was herself an erudite and skilled reader and editor, and generations of graduate students at Chapel Hill enjoyed her wit and quiet charm. After her passing on July 19, 2019, Jerzy stated that caring for her had been the great joy of his life.

Always keen to support all his students in their search for employment, Jerzy also knew how to defuse anxiety, likening the job-search to astrology (“all the stars must align”), adding that, in the end, “if one cannot find a post as a classicist, one should console oneself by becoming rich.” It must also be noted that unlike many male scholars of his generation, he actively supported female students and scholars: of the thirty-something theses and dissertations he directed, almost a third were by women, and some written by male students were on gender-related topics. Amy Richlin (Arguments with Silence:Writing the History of Roman Women, Ann Arbor 2014: 26), includes him in a short list of prominent men who have supported gender issues in Classical scholarship since the 1970’s. Many students of this scholarly paterfamilias have gone on to their own distinguished careers, ensuring an enduring legacy.